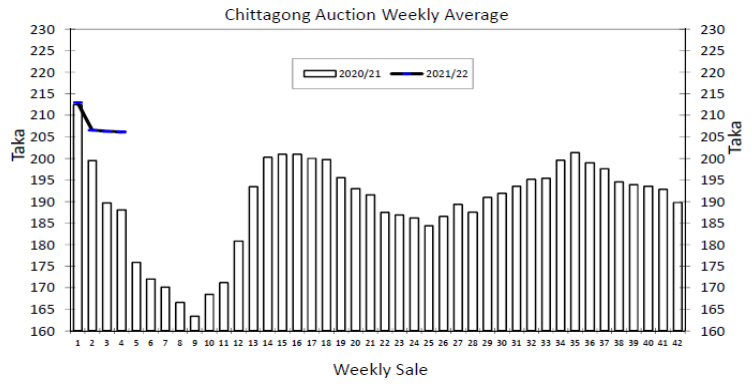 CTC LEAF: 24,550 packages of Current Season & 470 packages of Old Season teas on offer met with quite a fair demand.

BROKENS: A small weight of well made clean liquoring Brokens sold well mostly at about steady rates. A few improved Invoices were well competed for and were dearer. Medium types saw fair interest but were easier than last by Tk.2/- to Tk.3/-. Plain types saw some demand at lower rates whilst BLF teas were in less demand and there were more withdrawals.

FANNINGS: Select few improved Invoices were well competed for and were firm to dearer. Mediums met with fair interest but were easier. Plain types were much easier than last. There were more withdrawals. BLF teas followed a similar trend.

CTC DUST: 6,384 packages of Current Season & 60 packages of Old Season teas on offer met with a good demand. Best and good liquoring Dusts were in good demand and sold well at around last levels except for CDs which were easier by Tk.10/- to Tk. 15/- following quality. Mediums met with a fair interest and were a little easier. Plain and BLF met with only a fair demand at lower rates and there were several withdrawals. Blenders lent strong support with fair interest from the Loose tea buyers.

COMMENTS: There were only a few improved Invoices in this week’s sale which witnessed a fairly strong competition from all sections of the market and this resulted in higher prices. However, the bulk of the teas which were of plain descriptions met with only a fair demand and there were generally more withdrawals. Blenders were again the mainstay of the market with a little interest from the Loose tea buyers.